It was supposed to be the start of the good part of my Christmas holiday.  For someone with mental illness, the holidays tend to be more stressful than enjoyable.  But, I had made it through all the gatherings and I had 6 days until I had to go back to work. Awesome right?

Around 9:30 a.m. I was standing in the kitchen when I heard my brother call my name. His voice sounded weird so of course, I made fun of him. Then I walked around the corner and saw him and all thoughts of laughter fled my mind.

Nick was halfway down the hall leaning against the wall. Not right. He told me he didn’t feel good. He sounded drunk. Extremely not right.

I grabbed him and helped him to the couch and then, for some reason, put on my cheerleader’s voice and told Eric to call an ambulance.

The rest of the day was a nightmare. Certain parts are a blur. Other parts are seared into my brain forever.

Seared Memory: Nick walks down the steps from our porch, with the help of the Paramedics, and onto the gurney.  That’s the last time he walked.

When we got to the ER we were left to wait. We didn’t wait long thanks to Nurse Gloria. She had 4 spots left and she picked Nick for one of them. I truly think she saved his life.

I remember Nick telling me to text his girlfriend, Ines, to say he wouldn’t be able to make it to the movies that day but not to say why because he didn’t want to scare her. I am a terrible liar so I told her everything and she came straight away.  She is a beautiful person whose heart is bigger than her hair.

Nurse Gloria got us seen to and Nick started getting checked out. Doctors thought it was a stroke. But it was presenting weird. They gave him treatment for a stroke even though they weren’t 100% sure that’s what it was. Better safe than sorry.

At that point, I had to call my parents and tell them what was happening. My mom burst into tears. I kept it together on the phone. Nick said they didn’t need to come and I relayed that message. My dad came anyway. Of course! My mom just had her knee replaced otherwise she would have been there too. For sure!

Seared Memory: Nick starts crying and I hug him. “I’m having a stroke,” he whispers. I don’t know what to say to that, or how to make it okay. I just hug him.

Nick has been my best friend for as long as I can remember. He has been the most constant source of love and friendship in my life. I don’t count cats here; their shorter lifespans give them a disadvantage over amazing brothers.

For some reason, he’s always thought I could do anything and I’ve always tried to make him proud of me.

He has faced medical difficulties his entire life. Hospitalized for months at a time with asthma when he was a kid. Chest surgery. Ear surgeries. Allergic to the entire world. He’s been through so, so much.

Now this. This was bullshit. How was this even happening?!  What was it that was happening? Was it a stroke? Was it something else?

We ended that day in a place called SIMCU. “It’s one step down from ICU” they kept telling us and we took solace from that.

My brother, my best friend, started the day off normally; watching TV, eating some toast.

My brother, my rock, ended the day paralyzed and alone in the hospital without any definitive answers as to what was happening.

We left the hospital that night scared and confused. Hopefully, the next day would be less scary and we would get some answers.

Email I sent to my co-workers.

I’m not sure of the correct procedure so I’m starting here.

It appears that this gentleman was carrying a knife when he slipped and fell and lost control of the blade and a bloodbath ensued.

I’m pretty sure he’s beyond helping but I felt it was my duty to report it.

At the very least we should dispose of the body and mop up the blood before someone else gets hurt.

I recently decided to stop eating lunch at my desk and start eating in the lunchroom with my fellow humans.

I did it twice with positive results. Or so I thought.

Word must have gotten out because now when I enter the lunchroom this is the sight that greets me.

I have been donating my hair for quite a few years now.

I just did it again for the fourth or fifth time. I can’t remember. I’ll have to look for my little certificates.

I grew my hair for 3 years this time and it was almost at bum level!

People always say that it’s so great that I do this, but really, it’s because I am a lazy ass with a good heart. :p

I hate, hate, hate paying $70 to get my hair trimmed. I can’t be bothered dying it. I do nothing with it in the morning besides wash it … most of the time. It spends its time down until it dries and then up it goes into a ponytail or super messy bun-type thing.

Solution: grow it until I can’t stand it and then chop it all off and donate it! BAM!

This is amazing because:

I send my hair to Angel Hair for Kids because they rock.

This is me getting the latest choppy chop!

I grew it extra long this time because last time they had to cut it super short to get the 12″ … I’m talking razor blade short … and the short hairs irritated my neck fat. Never again! 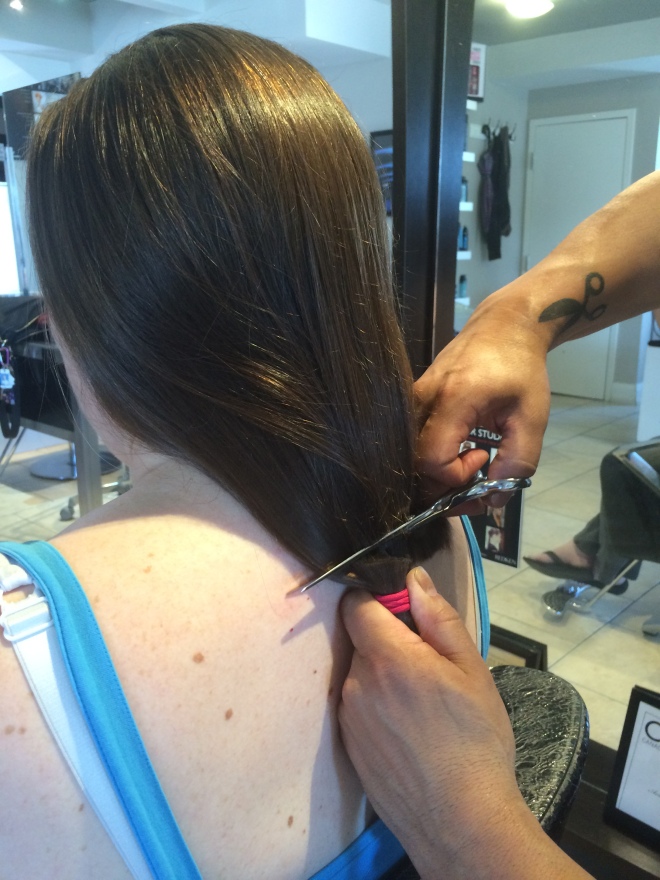 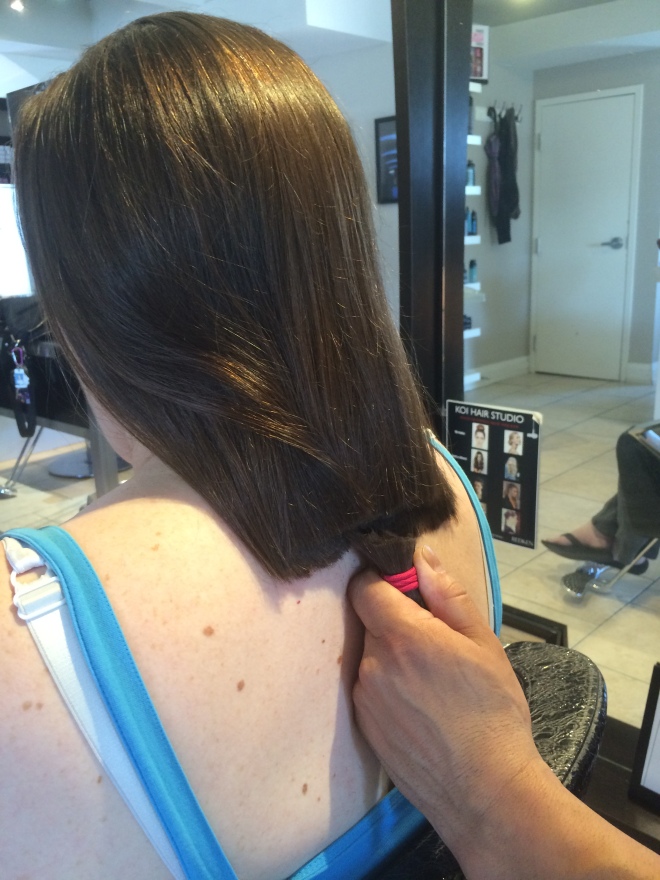 Afterwards I carried this around in my bag for a while. Then I started to feel like a serial killer so I got off my ass and packed it up and mailed it off. Which now that I write that down doesn’t sound any less serial killery. I cut all my hair off and mail it to people because I’m a good person!

There you have it.

If you’re lazy and nice … donate your hair!

I’m hoping to squeeze in one more before I’m too grey to be acceptable.

I was having a loose jeans day on Friday. I was at work and I had to pull my belt to the fourth hole and I thought to myself, Those 4 lunch salads are already paying off!  I’ve probably lost 5 pounds through salads alone! Yay for me!

Cut to Saturday. I’m getting dressed to meet my family for lunch. It’s summer, but I’m putting on jeans because I have amazingly white legs and I haven’t shaved them so jeans are safer. For everyone.

I go to do my belt up and I seem to be able to pull it even further than on Friday. Could this be? Could I finally be losing weight magically with no effort like I always wanted?!

I’m still as chubs as I ever was and my belt decided to prove that to me in a decidedly dickbaggish fashion.

I had broken my belt. It was literally hanging on by an effing thread. Okay, two threads, but that’s not much better! What a kick in the vag!

Also, I spent the whole weekend packing, because we’re moving soon, and I didn’t get out to buy a new belt so today is going to consist of me walking around holding my pants up manually. Unless I can find some string, or I tape them to myself somehow.

3/4 Asleep Me: Who is shining a bloody great big stupid light through the window when I’m trying to sleep!?

1/2 Asleep Me: That’s the sun, dumb ass. It’s still light out. We go to bed before the sun goes down. If you listen carefully you can hear children playing outside.

1/2 Asleep Me: Just put a stuffed animal over your eyes and go back to sleep.

I changed meds in December and after clawing my way out of that shit storm things have been pretty good.

I’m on a lower dose of the new meds, but if I supplement that with regular exercise I find that it does the trick. If I could just keep up the “regular” part of the exercise thing I’d be golden. 🙂

The problem with depression though is that it never goes away. It waits in the shadows. It’s always there, lurking. Waiting for the chance to get its claws into you again. It’s insidious.

In the quiet times I can sense it.

I’ll be at work and having just completed a successful social interaction with a co-worker I’ll sit back down at my desk, smiling and feeling good. At that moment when my smile starts to fade back into my every day face I’ll hear it.

Demon: I’ll find a way back in. When you’re weak.

I do know. And it’s sad and it’s terrifying. And it’s okay.

I’m writing this from a position of happiness and strength where I can see that darkness and I know that it’s coming but I also know that I’ll get through it.

If you’re in the dark place right now I’m here to tell you that it will get better. You’re important. You’re loved. You’re worth the fight. Don’t give up.

If you feel alone and like no one understands you then the internet is your best friend. There are so many of us on here that have found a place to belong, to feel understood, to speak out about the total assholeyness of depression and to not feel alone. We’re out here! Find us!

The most important thing I have learned from Jenny Lawson is that depression lies. Remember that.

Depression lies and I call bullshit!