My brother is a very nice man, with a streak of pure evil in him.

He likes to torture me.

For example, quite a while ago I went down to the basement … his domain, obviously … to do some laundry and while responsibly trying to dispose of my lint I found this: 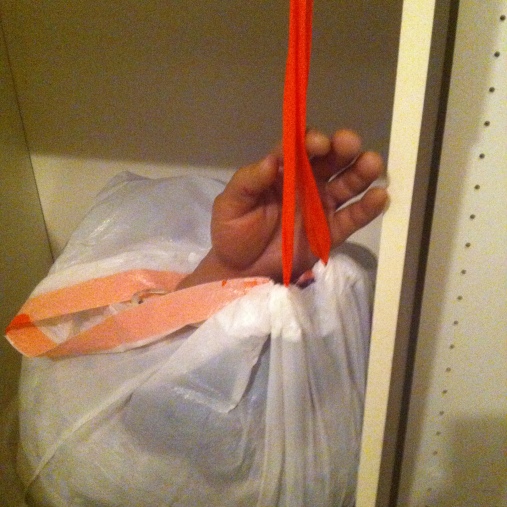 It scared the crap out of me and I was forced to burst into his bedroom and beat him with a freshly laundered sock.

More recent evidence of his evil and my idiocy follows.

I invited him up to watch a scary movie with me. Saint Eric doesn’t like to watch them so I normally do when I’m home alone. For some idiot reason I thought I would ask Nick to join me. IDIOT!!

He gets a kick out of watching me jump and scream and yell at the characters for never turning on the lights.

I had to do laundry in the Lair of the Basement Troll. I was down there folding and I hear weird noises. I open the door and Nick is standing there holding his phone to the door and playing “scary sounds” he found on the internet. Ass!

I leave the door open and keep folding but when I look again I can’t see him. This is a clear sign that he’s up to no good. I finish folding and I leave the room kicking because I know he’s out there being evil and if I’m lucky I’ll kick him before he scares me. Sure enough he’s standing in a dark corner of the room with a blanket wrapped around him so only his face is showing! DICK!

I had to finish my laundry. I had one load left in the dryer. Then I get a text.

I waited for a while and then decided I had to go get it done. I asked Saint Eric to come with me and in a completely unprecedented and unsaintly move he said NO! I tried to explain that I was scared of the dark and what Nick had in store for me but he didn’t seem to think that was a reasonable excuse for a 37 year old woman not to go into the basement alone. Pfffft.

I decided to be brave. I opened the door. I turned on the light. I got to the bottom of the stairs and I peered into the room and then I saw it … the laundry room door was ajar … I freaked out and ran up the stairs whimpering. Back in the living room I did a little dance of fear while telling Eric he had to go down with me. He had the gall to laugh at me and still refuse to help.

I totally bailed on the laundry. I jumped on the couch and hid under my blanket.

Eric laughed. Laughed at my pain. The nerve.

Thanks to Nick I was forced to wear undies from the dregs of my collection and a shirt that doesn’t fully cover my chub which means I will be uncomfortable all day! Ass face!

Why didn’t I go get my laundry in the morning before work, you ask?

Because it’s still dark when I leave for work, assholes!